Going to The Scene of the Crime

By going to the scene of an alleged crime we gain an advantage in facing off against trial witnesses.  When the witness says they could see from a given point, we will have tested that in advance.  The picture at the right comes from a rape investigation in Bellevue.  The alleged victim claimed to have been raped and photographed in the dark in that room.  We went to the scene with a professional photographer.  By comparing the color of the carpet with the lights on against the color with a flash picture taken in a dark room we were able to show that the picture that was taken on the night of the incident had to have been taken in a lighted room, impeaching her statements to the police and prosecutor.  This was proven with scientific evidence relating to the “color temperature” of the light that came from the camera’s flash alone as compared with the color temperature produced when the camera flash only supplemented the room light coming from the ceiling fixtures.  As a result of our investigation, which also included obtaining cell phone records, the prosecutor dismissed felony rape charges.  An innocent man was saved from having to go to trial and being wrongfully convicted

Sometimes it is necessary to re-create the scene to show the viewpoint of the accused at the time of the alleged crime.  The photo to the right came from the investigation of an alleged vehicular assault on a police officer at the airport.  We needed to be able to show that the Defendant would not have been able to tell whether the officer was standing so close that he might get hit by the client’s car. 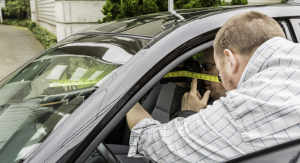 In order to get the camera in precisely the right position, we first put the client in the driver’s seat and measured where his eyes would have been.  Then we put a photographer in the same seat and precisely positioned the camera to get a photograph demonstrating the field of vision.  Photographic evidence proved to be the key to the case when we obtained surveillance camera footage that contradicted the official version of what had happened.  Curiously the prosecution failed to turn over the key surveillance tape, which we obtained instead through a Public Records Act demand served on the airport police within two days of the incident. The result: a felony was reduced to a misdemeanor.