How Does Robert J. Wayne Measure Up? 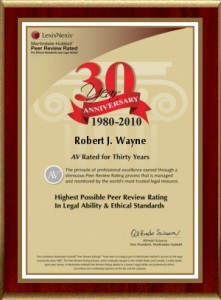 Practical Experience:  45 years in practice.  Robert Wayne has tried numerous criminal and civil cases before juries in state and federal court, winning acquittals and judgments for clients.  One jury unanimously entered a special verdict in a sex abuse case, adding to the verdict form that not only was Mr. Wayne’s client not guilty. but that “the charges were unfounded.”  In another case, a federal judge refused the Government’s request to impose a $6 million dollar restitution obligation on a former mortgage broker and. after hearing from Governments FBI expert, imposed no restitution at all.  Largest civil judgment entered for a client exceeded $1 million. Formerly with Washington’s largest law firm.  Formerly with the King County Prosecuting Attorney’s Office (1976-1978).  Law Clerk on United States Court of Appeal for D.C. Circuit (1974-75).  Independent practice since 1978.

Who Will Represent Me:  Legal Services and all appearances in Court by Robert J. Wayne personally.

To see Mr. Wayne argue an actual case in the Washington Supreme Court, Click on the picture above.

On May 13, 2010 Robert Wayne argued a case involving the protection of property from forfeiture before the Washington Supreme Court in Guillen v. Contreras.  The Argument concerns the right of property owners to attorneys’ fees when they substantially prevail.  Mr. Wayne represented the Washington Association of Criminal Defense Lawyers (WACDL) as a friend of the Court (amicus curiae).

The Supreme Court ruled unanimously in favor of the right of the property owner to recover attorney’s fees, and in an 8-1 decision agreed with the arguments put foward in Mr. Wayne’s brief for WACDL, incorporating a direct quotation from his amicus brief.  The lower courts that had denied fees to Mrs. Conteras were reversed.  The decision of the Supreme Court should make police departments think twice before over-reaching and seizing more property than is justified.